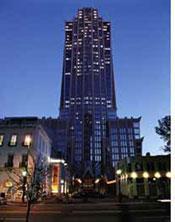 The Queen City prides itself on its supportive business attitude and the vital, growing firms that benefit from it. In return, businesses and the services that support them have helped shape the city and the region - an area with a strong and diverse economy, high-quality expanding workforce, solid technical, educational and transportation resources, vibrant communities and diverse lifestyles. The influx of new, skilled workers to the area and partnership between the private sector and public agencies ensures that Charlotte will continue to be a great place to do business.

Finance is a major player here; with more than $1.8 trillion in assets, Charlotte is second only to New York City. Five of the nation's top 150 banks have operations in Charlotte. Two banks that rank in the nation's top five are headquartered in Charlotte: Bank of America Corp., ranked first, and Wells Fargo, ranked fourth largest nationally. The two institutions have branches throughout the nation and provide specialty banking services worldwide.

Uptown's skyline has been influenced by these and other banks, whose growth is reflected in skyscrapers such as Bank of America Corporate Center, The Hearst Tower, the IJL Financial Center and One Wachovia Center. Beyond its financial prowess, Charlotte is also home to seven Fortune 500 companies including Duke Energy, Goodrich, SPX, Nucor, Bank of America and Sonic Automotive. The headquarters for Family Dollar and Lowe's are located in nearby suburbs. Additionally, nearly 310 Fortune 500 businesses operate facilities in Charlotte.

Small businesses flourish in the area as well. In the past ten years, nearly 8,000 firms have opened in Charlotte, offering more than 74,000 new jobs.

As a manufacturing center, Charlotte is home to more than 2,000 manufacturers that employ over 100,000 workers in textiles, electronics, printing, plastics, industrial machinery and other industries.

UNC Charlotte has partnered with the public and private sectors to create the Charlotte Research Institute, an umbrella organization of businesses and government entities that fosters research and collaboration. The 1.2-million-square-foot facility is located on the campus of UNC Charlotte.

Charlotte's status as a transportation hub significantly facilitates economic growth. Served by a superb network of highways and as the center of the country's largest consolidated rail system, Charlotte continues to be a focal point for development in the Southeast.  The ever-expanding outer belt, I-485, has helped to increase development along Charlotte's outskirts.

If you flew in for a job interview or a house-hunting trip, you've already seen Charlotte/Douglas International Airport, the nation's 12th busiest in terms of total operations. The facility, on the city's west side, averages 587 flights daily and enplanes nearly 30 million passengers each year. Charlotte is the largest hub for US Airways, which offers flights to points all over the United States and internationally, including non-stop service to 127 destinations.

In 2004, Johnson & Wales dissolved their Norfolk, Va. and Charleston locations and moved to Gateway Village in Charlotte. The school, which focuses on business, hospitality, culinary arts and technology, brings more than 2,000 students to Uptown as well as a full campus, an addition that significantly enhances business prospects in the Center City.

The Bobcats, Charlotte's NBA team owned by Michael Jordan, is anticipated to bring in considerable economic growth to the Charlotte region. After playing their first season in the Charlotte Coliseum, the Bobcats moved to the Charlotte Bobcats Arena in First Ward for their 2005-2006 season, bolstering commercial and residential development in Uptown.

Another new business is the Billy Graham Evangelistic Association headquarters, which recently moved from Minneapolis to Charlotte - Billy Graham's hometown. The headquarters will offer hundreds of new jobs and draw thousands of tourists from across the country.

In 2006, the U.S. National Whitewater Center opened - a world-class whitewater park, modeled after the 2000 Olympic site in Australia.  Located at the intersection of I-85 and I-485, the Charlotte Whitewater Park will draw tourists and outdoor sports enthusiasts from across the country.

According to the Charlotte Chamber, nearly 600 foreign-owned companies do business in Charlotte, representing half of all foreign companies in the state. Countries with the greatest representation include Germany, Japan and Great Britain, with Swiss, Italian and Canadian firms on the rise. Charlotte's banking industry has been extremely accommodating to start-up firms and minority businesses.

All this business has given Charlotte an extremely healthy economy. The city has an exceptionally low unemployment rate and has continued to grow steadily.

Business doesn't stop at the county line, either. Other counties in the Charlotte metro region have equally healthy economies, thanks to their proximity to Charlotte's amenities, as well as their own aggressive recruiting efforts and, in some cases, incentives to relocating businesses.