Uptown
Viewed from an upper level in one of Charlotte's glitzy skyscrapers, the Uptown roofs below resemble an ever-changing sea. There is new construction everywhere - high, mid and low-rise. Moreover, a good many of those roofs represent homes: penthouses, condominiums, apartments and even single-family homes.

Uptown is one of the city's fastest-growing areas, with 11,000 residents now and a number that is expected to increase to 21,000 by 2010. In fact, there is so much housing growth that the Multiple Listing Service has given Uptown its own designation: Area 99.

As the numbers grow, so do the amenities that add so much to life. Some Uptown residents find so much here to entertain them that they park their cars on Friday and don't movie them the entire weekend. They're within walking distance of much of the city's cultural and entertainment venues, with more headed their way.

Block-long, massive Bank of America Stadium anchors Uptown on the southwest end. Snarling panther statues outside the gates hint at the passions inside as the Carolina Panthers take on NFL opponents.

On the other side of Uptown, the new Charlotte Arena is home to the NBA expansion team Charlotte Bobcats. The growing First Ward neighborhood, once the site of numerous parking lots, has seen significant changes in recent years, in part due to the construction of the new arena.

The aptly-named Courtside is a 17-story high-rise of 106 condominiums in First Ward at the corner of Sixth and Caldwell. Recently completed, it features 7,500 square feet of retail and restaurants at the street level.

At the other end of Uptown stands the ecclesiastically styled McColl Center for Visual Art. The city's cultural district, dubbed North End, extends from the center's front door southward to the center of town, Independence Square, at Tryon and Trade streets. 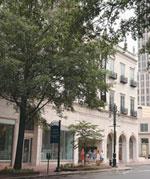 This district includes Discovery Place science museum, the Charlotte-Mecklenburg Library, North Carolina Blumenthal Performing Arts Center, Spirit Square, the Mint Museum of Craft + Design, the McColl Center for Visual Art and a handful of private art galleries. The area also includes an elaborately renovated Museum of the New South and the new $40 million ImaginON, an ambitious project of the Charlotte-Mecklenburg Library and Children's Theatre that includes a youth library, classrooms, technology center, early childhood reading center, performance stages and a craft shop. At the site of the old Carolina Theatre, the Bechtler Museum of Modern Art intends to preserve the faade and stage of the theatre and incorporate them into a new building. The museum will include works by preeminent modern-era artists including Edgar Degas, Pablo Picasso and Andy Warhol.

Charlotte worked hard to lure the NASCAR Hall of Fame to town. Construction is now under way on the corner of Caldwell and Stonewall and the facility is expected to be competed by 2009.

Opportunities to eat, drink and be entertained abound in Uptown. The number and variety of Uptown restaurants keep growing, with fine dining, down-home Southern standbys and ethnic cuisine all part of the mix.

Prefer to dine on your rooftop terrace or by your urban window? Reid's Fine Foods at Seventh Street Station parking garage supplies Uptown kitchens. In summer, you can supplement the fare with farm-fresh produce from the Center City Green Market in the Station's plaza.

Recently restored, the Charlotte trolley can be heard clanging from the Atherton Mill in South End up to Ninth Street in Uptown. The #85 car was built at the Dilworth Trolley Barn in 1927 and is the only original electric trolley car still in operation. Three new cars joined the original this summer to provide trolley rides seven days a week.

In First Ward's Garden District around Ninth and Davidson streets near the trolley line, condominiums and "townloft" homes are going up in a wide price range.

For a long time, Fourth Ward was the only residential pocket in what was the concrete expanse of Uptown. The turn-of-the-century homes in this quaint quadrant between North Tryon and West Trade streets had fallen into disrepair but were restored by determined homeowners and the bank that became Bank of America.

Fourth Ward is now one of the most charming spots in the city with its sidewalks and street lamps, its cozy front porches and Fourth Ward Park. Jefferson Square on Church Street models European urban architecture, and similar residential buildings are quickly following.

A new wave of construction is joining the condominium mid-rises already along Tryon and Church. Some projects include 715 North Church boasting 85 condominiums, where some units are reserved for artists working at the McColl Center for Visual Art, and offices on the ground floor.

Fifth and Poplar, a 305-unit mix of penthouses, rental units, and town homes, offers a number of amenities, including a concierge service, state-of-the-art fitness center, central courtyard and its very own Harris Teeter.

Even Elmwood Cemetery, the historic green spot separating Fourth Ward from Third Ward, is getting a face-lift as it plays host to strollers and joggers.

In Third Ward, in Uptown's southwest quadrant, small, renovated homes mix with new condominiums and apartments. It's flanked on its southern side by Bank of America Stadium, the Panthers- practice field, and on its northern side by West Trade and Gateway Village - Bank of America's mammoth new mix of homes, retail and office space. The Village stretches along five blocks of West Trade and also has a YMCA. Gateway Lofts and Post Gateway Place near Trade Street add nearly 300 apartments to Uptown.

The arrival of Johnson & Wales University also enhances Third Ward as it opens its doors in the fall of 2004, creating an $82 million campus and bringing 2,000 students to the center city. The school, which leases part of the Gateway Village, is constructing an eight-story apartment building for students at Fifth and Graham to house 800 students.

The last piece of the Uptown residential puzzle began with The Ratcliffe on the Green, an upscale condominium high-rise in Second Ward, an area in the southeast quadrant of Uptown that had been occupied mostly by government buildings. The luxurious Ratcliffe offers an interactive park with fish fountains and landscaped walkways and is surrounded by 60,000 square feet of retail and office space. Other residential development around Marshall Park is called for in the citys 2010 plan. It is predicted that Second Ward will soon be home to more than 2,000 new housing units.

The excitement that attracts people to Uptown home ownership is evident also in commercial life. The Westin Hotel on Stonewall and College Streets opened in 2003, offering a unique new building for the Charlotte skyline. With 700 rooms, the hotel is right across from the Charlotte Convention Center and features a bar, restaurant and 40,000 square feet of meeting space.

The Hearst Tower on North Tryon Street soars 46 stories, making it the city's second tallest building after the Bank of America tower, which rises above all others at 60 stories. Across Tryon, the 30-story IJL Financial Center, which was built in 1996, shares similar window designs and exterior colors as the Hearst Tower. Recently known as Three First Union, Three Wachovia Center ascends 32 stories on South Tryon, and a 27-story tower at 300 S. Tryon includes a front courtyard and outdoor seating and dining.

It's all happening within a relatively small area - the blocks radiating outward from the intersection of Trade and Tryon streets. For the city at large, that's the center of action.

And for an increasingly large number of Charlotteans, it's the place they call home.